I do not want to join in the discussion which baroque works shall or can be performed by hornplayers and which by trumpet-players, but I would rather call on both sides to realize the baroque sound-world. There simply is no baroque horn on which all baroque parts can be interpreted authentically. However there was a vast palette of instrument types, which offered an interesting and seamless transition from the trumpet to the hunting-horn with big bell. Please read about this matter in the front article of the menue point "Natural Horns"! There is a list, which kind of baroque horn presumingly is best for the different Bach pieces.

My "Corno da caccia"- version meets the brighter side of the sound-palette. 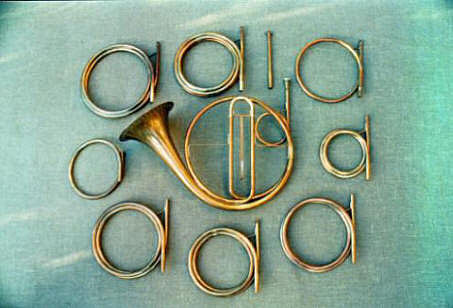 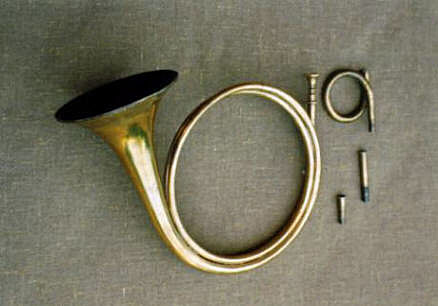 Original instrument, about 1730, Friedrich Ehe in Nurenberg, in high D, with C-crook and 2 intonation pieces, out of the museum Caroline Augusteum, Salzburg 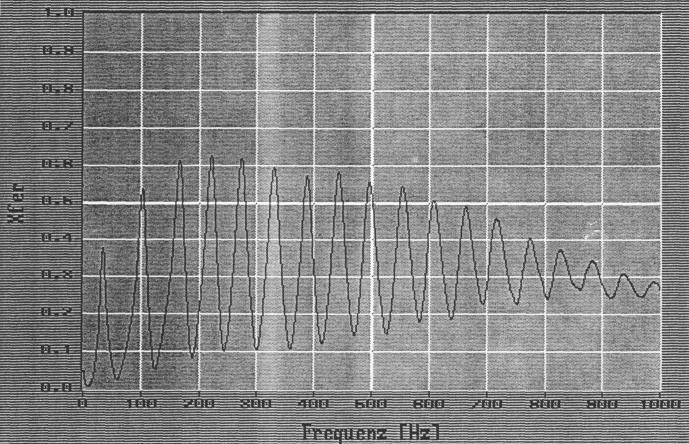 Even without hand in the bell my "Corno da caccia" speaks very clearly in the high range.

Beside the brighter "Corno da caccia" and "Corno da tirarsi" in the baroque age there were also several darker versions as the "Corno", the "Corne du chasse" and the "Corne parforce", with bell diameters of up to 30 cm. Either they had fixed, narrow leadpipes, or crooks which were built too wide to be well in tune.
My Baroque-"Corno" covers the darker range of the baroque horns. Possibly some "Corno da caccia" parts were also supposed for hunting horns with a narrow leadpipe. For example the original F. Ehe "Corno da caccia" speaks poorly and tunes badly if it is cylindrically elongated to F which is imperative with a shaft for trumpet mouthpiece. But with a narrow conical leadpipe, both of my baroque versions have very good acoustic characteristics, even in the darker keys. In the opinion of many, J.S. Bach's Brandenburgisches Konzert Nr. 1 should be performed on an instrument like my Baroque-"Corno". 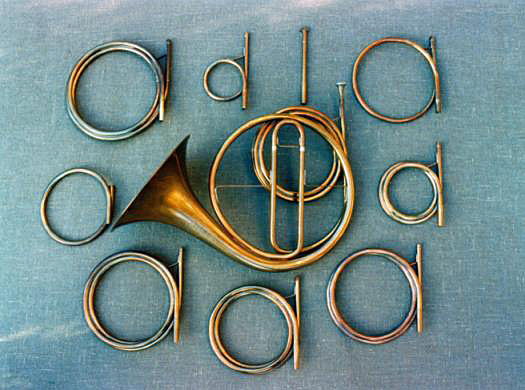 Description of my baroque "Corno" Version: 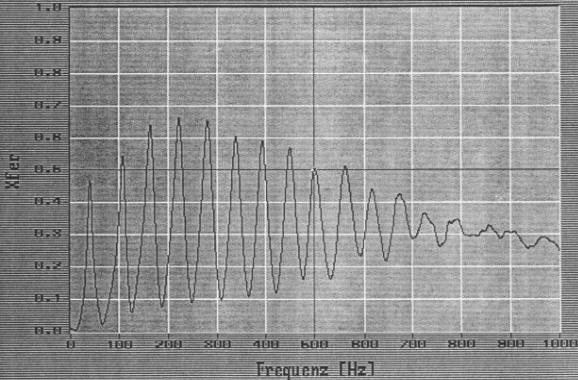 The curve of the bell flare of a horn is too smooth to speak clearly in the high register without hand.

With a hand in the bell the high register speaks very clearly. 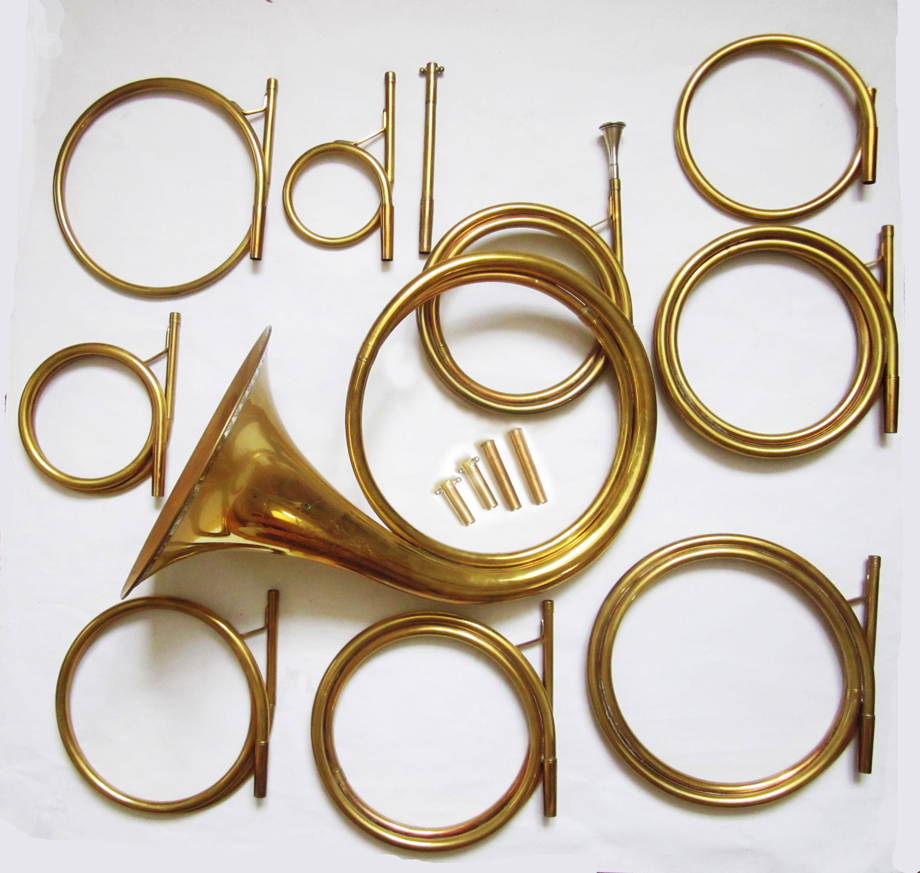 For optical reasons we also offer a Baroque Corno without tuning slide in the center, - same measure, same crooks. The pitch is adjusted by 4 different tuning bits. The distance between the horn and the lips is varying this way, what´s not ideal ergonomically, but it looks more historically. 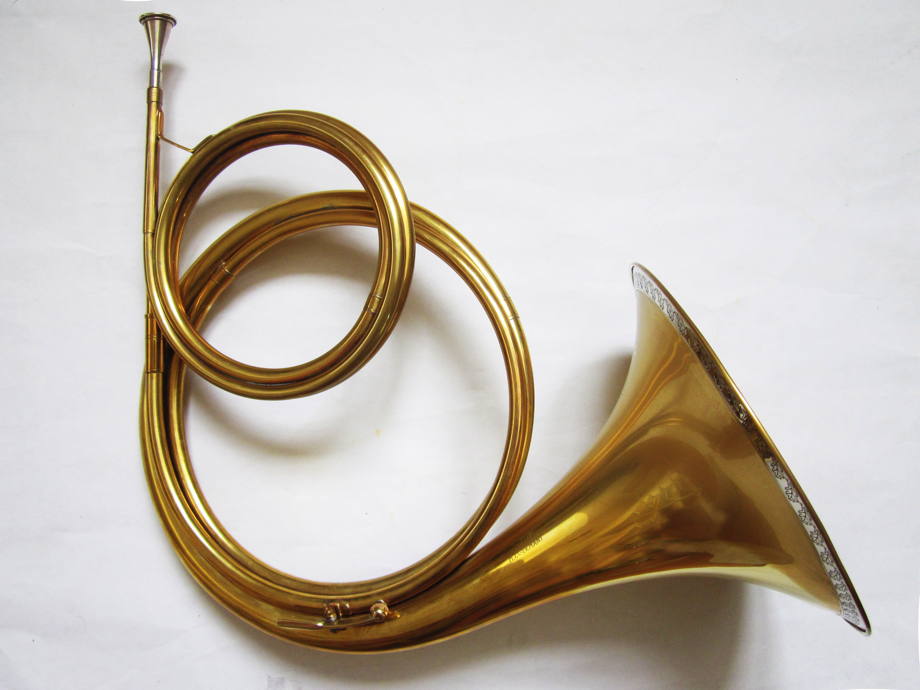 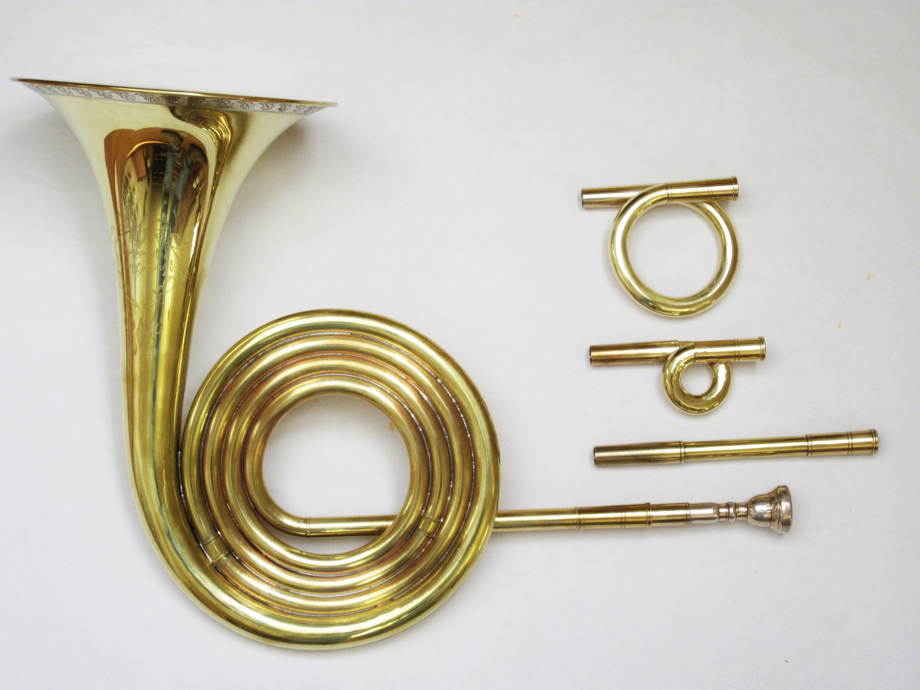 Optically a vers beautiful instrument, designed according that famous portrait of Gottfried Reiche. You can get the notes in between the natural harmonics by moving the whole instrument. The singel tuning slide at the beginning needs the shaft of a trumpet mouthpiece. With one hand you hold the inside tuning slide with the mouthpiece, with the other hand you you move the whole horn in and out.